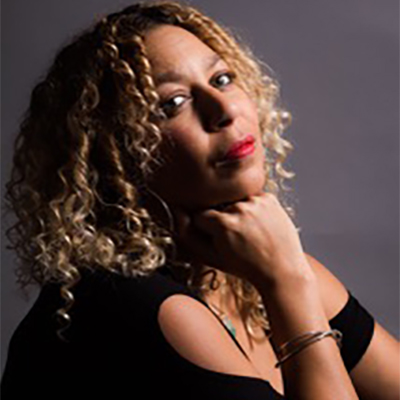 Salena Godden is a poet, broadcaster, essayist and memoirist whose work has been widely anthologised. The Royal Society of Literature elected her as a fellow FRSL in November 2020. Canongate pre-empted world rights to her debut novel Mrs Death Misses Death. It is longlisted for the Gordon Burn Prize 2021. Godden has had several volumes of poetry published including Under The Pier (Nasty Little Press) Fishing in the Aftermath: Poems 1994-2014 (Burning Eye Books) Pessimism is for Lightweights – 13 Pieces of Courage and Resistance (Rough Trade Books) and also her literary childhood memoir, Springfield Road (Unbound). During 2018 her poem ‘Pessimism is for Lightweights’ was displayed at the Arnolfini Gallery in Bristol. It has now been donated to The Peoples History Museum, Manchester, where it is now on permanent display. Salena Godden has recorded several albums, most recently her spoken-word album LIVEwire (Nymphs and Thugs) was shortlisted for the Ted Hughes Award. In May 2020 she released ‘The Lockdown E.P’ (Nymphs and Thugs) with profits being donated to the NHS charities.

All Sessions by Salena Godden